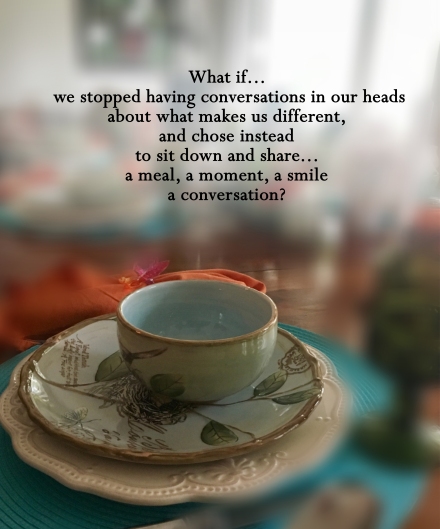 It is several years ago and I am working on an awareness campaign with a group of individuals with lived experience of homelessness. They want ‘the others’ to know they’re not all bad people. That it’s the circumstances of their lives that may be different than others, but they are still human beings. They have dreams. Needs. Wants. Wishes. And one of them is, to be treated with dignity.

“But didn’t you spend all your time concocting ways to make ‘the others’ feel uncomfortable?,” I tease one of the men, (I’ll call him Jack) a tall, burly Indigenous man whose life path lead him to surviving 20 years on the streets. “Didn’t you make all sorts of plans on how to create trouble for ‘them’?”

Jack laughed. “Yeah. Right. There I was all hopped up on drugs and I’m spending my time trying to figure out how to hurt some white guy on the street instead of trying to figure out how I’m gonna get my next hit?” He went on to talk about how, for him and his cohorts, ‘the others” were the ones they wanted to avoid. They only caused them trouble, and trouble meant involving the cops and that’s the last thing anyone wants when they’re trying to survive on the streets.

And then he added, “You don’t hear a lot of stories about homeless people killing non-homeless folk. It’s mostly the other way around. Like those kids who poured gasoline on a guy sleeping under a bridge and set him on fire. They weren’t homeless. They came from some ‘other’ neighbourhood.”

I was reminded of Jack this morning when I read David Kanigan’s powerful post, Waiting. At the Star Market. Trying to Bend the Image. on his blog, Live & Learn. (David is an exquisite writer. His posts always provoke deep thinking.)

In David’s story, he is struggling with a decision to sit on a seat at a train station. It’s a couple down from a man who appears to be experiencing homelessness. The story in his head is complex and very human. Should I? Shouldn’t I? What if?

He tells it beautifully and I am there with him. I have had that internal conversation. Felt the eyes of ‘the others’ watching to see what I will do.

Sometimes, I have chosen to sit down. Sometimes, not.

Yet, no matter my decision, it is that very conversation in my head that creates my ‘otherness’.

Charity, kindness, compassion are not committed once we’ve weighed the options, considered the consequences. They are born of the heart, given without expectation of reciprocity. Enacted because we see all humanity as us. Not ‘us’ and ‘them’. Us.

In David’s story, he sat down.

Eventually, the other man walked away. Perhaps he, like Jack, was afraid of ‘the other’. Perhaps he was trying to avoid contact with ‘the other’, because in his world, trouble is all ‘the others’ have caused him.

What if… There are ‘others’ and there are ‘the others’.

What if… Some of us live in ‘otherness’. Privilege. Relative comfort. In homes with running hot and cold water. We have closets filled with clothes. Stories that make up our lives of abundance, or if not abundance, at least enough to get month to month without fearing losing it all.  And, there are others who have stories of lack. Of loss. Of poverty… of things. And not of spirit. Heart. Dreams.

What if… those we view as having nothing, or as being the ‘other’ to our ‘otherness’, are seeking that which we seek? Dignity. Respect. Love. Happiness. Peace. Joy. Connection. Belonging…

What if… we all decided to sit down beside one another or at the same table and didn’t see it as an act of charity bestowed from one to another but simply as an act of making human connection.

What if… no matter where we walk, or stand, or sit, we see each other as the same kind of human, just different?

What if… we stop having conversations in our heads and instead, share… a meal, a moment, a smile… a conversation?

4 thoughts on “What if… we started talking to one another?”