I speak three languages. No longer fluently. But I still can understand French and German and speak it to be understood if the subject is relatively simple and about daily matters.

I once took a course in speaking Mandarin. Another in Japanese. And one in Spanish.

What I’ve never done is considered taking a course in learning how to speak  Cree. Or Blackfoot. Or any of the other 60 distinct Indigenous languages of Canada.

Because if there’s one thing I’ve learned working the homeless-serving sector for the past 12 years, it’s that there is a lot of Reconciliation needed if we are to make a dent in the racism Canada’s Indigenous Peoples face everyday at the hands, and words, and actions, of non-Indigenous Canadians.

We are a country with a Big Problem. 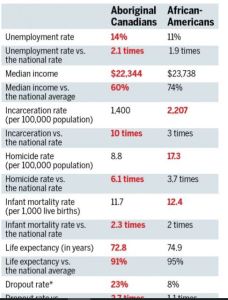 To view the entire chart — http://www.macleans.ca/news/canada/out-of-sight-out-of-mind-2/

And it’s not ‘Those Indians’, as someone called Indigenous Peoples at a dinner party awhile back, who’ve got the problem (though their lives are tragically impacted by it every day in every way and have been for generations).

It’s OUR problem. It’s Our Racism. Our intolerance. Our desire to pretend we don’t have a National crisis where infant mortality is higher for some than others. Where certain peoples are incarcerated at higher rates than the rest and life expectancy shortened by at least 10 years.

The problem is, we don’t want to face the fact, it’s OUR problem. We like to say,  “Look at us! We’re not as bad as the US and the way they treat African Americans. No. We’re better than that.”

Just a quick glance at the chart to the left from a recent article in MacLean’s Magazine, “Canada’s Race Problem? It’s even worse than America’s.” shows just how serious the issue is in Canada.

The challenge?  As the article goes on to explain, “our Fergusons are hidden deep in the bush, accessible only by chartered float plane: 49 per cent of First Nations members live on remote reserves.”

I am having trouble reconciling that view of Canada with My Canada. The land of tolerance, equality, inclusivity.

But then, every day at work in a family homeless shelter, I struggle to align My Canada with the lives of the families I see coming to the shelter. They are 60% Indigenous. 25% new Canadians/immigrants.

And what do they find in the city?

The very things they fled.

It sure isn’t the same as mine.

So rather than expect someone else for whom trust has been broken again and again to step towards me, I think it’s time I took a step towards Reconciliation.

And one way to do that is to learn a language that will help me understand better what their Canada looks like.

Because one thing I know for sure… their Canada does not treat them the same way My Canada treats me. And that’s something I want to help change.