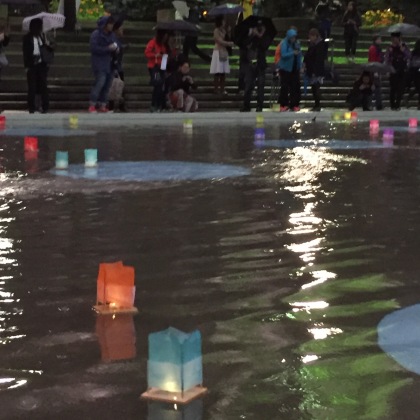 On Saturday evening, I was invited to address the crowd gathered at Civic Plaza to commemorate the devastation that rained down on Hiroshima and Nagasaki, Japan, 71 years ago. It was an evening to share our fears and hopes for nuclear disarmament, for peace on earth, for a future free of the fear of nuclear devastation.

It rained, hard, and still the people stood and listened and watched and when the moment was right, set their lanterns onto the surface of the reflecting pool and let them float into the night.

There were moments where I wanted to cry. To scream out, Stop this! Stop this suicide wish we have with our planet. We are killing ourselves and the world as we know it. Stop it.

A nuclear disaster is a real and present danger. It continues to grow in the darkness of our desire to not acknowledge it. It continues to fester in our silent voices refusing to call out for disarmament. To not stand up and demand we free ourselves from relying on war to make peace.

While Canada does not possess nuclear weapons, we have a long history of colluding with our super-power 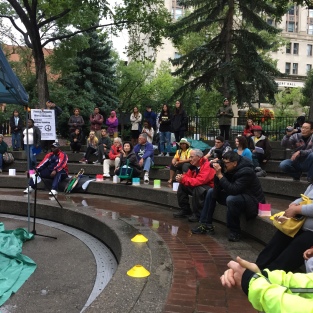 neighbours in fighting for the right to arm our military with weapons of mass destruction. In the name of national security we tell the Commissions and Tribunal’s when they gather to negotiate, “Our neighbours need them to deter other not so rational nations from using their weapons of mass destruction against them.” And so, in the shadow of our big brother, we do not insist they disarm. Instead, we tell ourselves the world is safer when we stand together with the nuclear super-powers and don’t make them back down from their continued demand to keep their arms and stay in the game of improving upon their prowess as creators of mass destruction.

The current presidential campaigns do not leave me feeling that safe living in the shadow of the US. I don’t feel so confident that some of the 1500 nuclear warheads they have on call will not be used indiscriminately under the misguided belief they will teach someone on the other side of the globe a lesson. 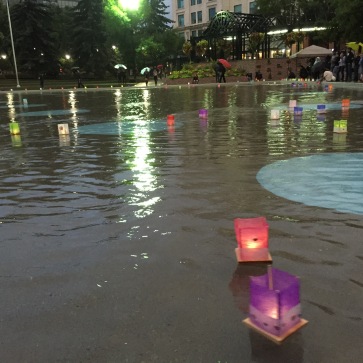 Fact is, there are over 15,550 nuclear warheads co-existing with us on this planet today. When the recent coup took place in Turkey, there was great concern over the safety of the airport. It is believed by many that the US has nuclear weapons stored there.

We think we are safe from the fallout. We are not.

It would only take 100 of today’s warheads, which are 20 times more powerful than the two dropped on Hiroshima and Nagasaki in 1945, to create a cloud so dense it would block the sun for years. In the nuclear winter that would ensue, all plant life on earth would die. And so would much of life.

So this is my fervent plea, to Prime Minister Trudeau, to Premier Notley, to Mayor Nenshi who as a signatory to Mayor’s for Peace is calling for the total abolition of nuclear weapons by 2020.

Let’s Do It!  Let us disarm, disengage, disconnect the weapons of mass destruction and decide now to take the path to peace.

In peace and the hope for a nuclear weapon free world.

To read the full text of my speech, please click 2016 Lantern Festival

8 thoughts on “Dear Prime Minister Trudeau: In the name of peace.”

Poised in this liminal space of night slipping effortlessly into day, I find myself weeping in the inexplicable beauty of Life's mysterious beginnings and endings. Grace breathes life into all the spaces. *********************** #myeverydaymagic #gloriousnature #liveinthenow #morninghasbroken #lifeisbeautiful #inspiringmoments #savorthemoment #livenow #begrateful

Views from a skeptical heart

Everyone from everywhere
Paintin’ Tipsy
@ Work

the entrepreneur's resource to start up | revamp | scale your business

A Canadian Perspective on Living in the Windy City!

Random stuff, reflections on the meaning of life and death, humour, self-deprecation, a bit of bad poetry.

Writing daily towards her goal...

Thrills, Spills, and just a dash of Romance

One writer's experiences, and battles with words

The Art of Blogging

Time in the kitchen should be magical