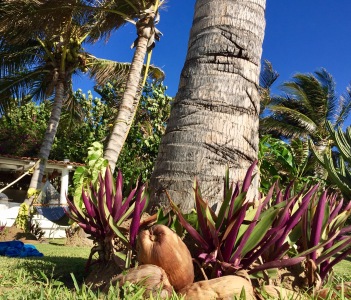 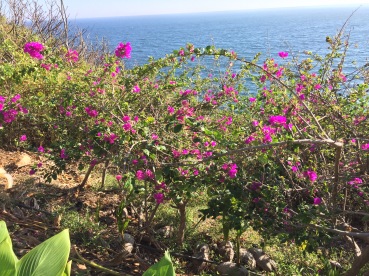 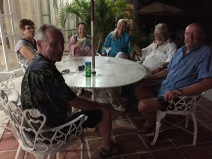 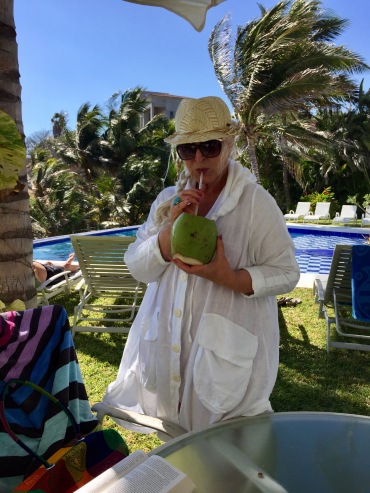 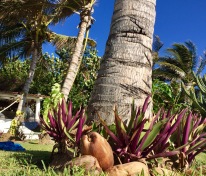 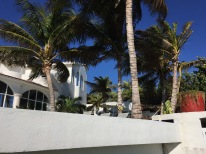 It is the Festival Roscas De Reyes and Roscio has been wrapping and handing out gifts to the various service providers who have come to the door all morning. Ursula tells us this when we arrive at Villa Sabah after a leisurely morning at Villas Fa-Sol. 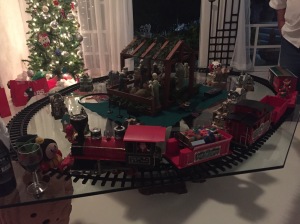 This is a predominantly Catholic region where the day of the 3 Kings is the highlight of the new liturgical year. Everywhere we have gone, I have seen beautiful Crèche. Hand-painted, gilded, carved wooden creations. They sit in malls and the corners of shops and along streets. Next to Ola, Gracias Mon Deus is the phrase I’ve heard most frequently.

C.C and I had planned an adventure on Mopeds but his stomach had other ideas, most of which included not venturing too far from a washroom. So, we lazed about for the morning and then joined Ursula and Andrew, and our hosts Guillermo and Roscio by the pool for the afternoon at Sabah.

It was a fitting end to our last full day in Huatulco. Especially when it included Margueritas on the deck at Fa-Sol at 5:30, followed by an incredible dinner prepared by Sandra.

Under the star studded sky, at a flower laden table and to the sound of the surf crashing on the rocks below, we dined on the most amazing Avacado Soup, followed by a fresh salad of lettuce and tomatoes and avocado dressing and then, the piece de resistance, El Pescado en Papilotte. Scrumdilicious! The first round of dessert was strawberries in cream or a Flan that was truly to die for.

And then, it was time for the Roscas de Reyes, a giant wreath like cake that everyone had to cut into in the hopes of finding ‘the Bebe’.

In my family, the cake for the 3 Kings always had coins — finding the coin also meant being the King for the Day.

In the tradition here, the one’s who find one of the several ‘bebes’ tucked into the cake must bring Tomales to everyone on February 2nd, the day of the Blessing of the Animals. 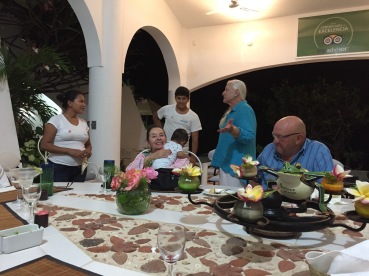 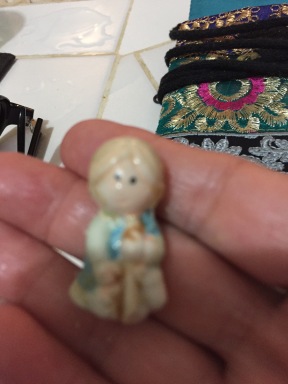 Amidst laughter and suspense-filled ooohs and aaahs, we cut into the cake. I didn’t cut out a Bebe of my own but Gerardo offered me his and then one of the young girls gave me hers and then Roscio offered up her “Joseph”. And now, I have a little family of beautifully carved pottery. Mary, Joseph and Le Bebe.

What a wonderful gift and what a beautiful way to spend our last evening in magical Huatulco.

This morning, Roscio is taking Ursula and I to the market in the Centre of the city. “We will have breakfast of coffee and Tomales,” she tells me, “And you will see more of the real Mexico.” 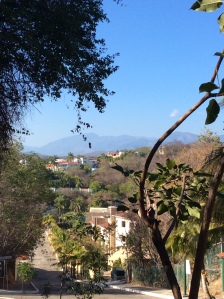 There is much beauty here in this real Mexico at the edge of the Pacific. The rocks push up out of the clear blue waters of the sea that laps and leaps at each crenellated finger of land. Palm trees march up the sides of the mountains and spikes cacti cling to the sandy soil as if defying the winds to blow them away. Flowers compete in brilliant colour, vying for the title of ‘most exotic’, ‘most brilliant hue’, most fragrant.

And amidst all the beauty and colour, there are the people who make this land so special. Their smiles. Their lyrical language. Their gracious manners. Their warm hearts. (And did I mention their fast driving?)

There is much beauty in this land at the edge of the sea and the most beautiful of all are the people. 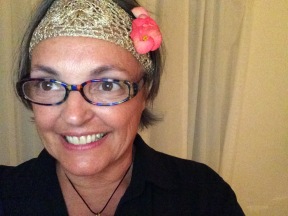