In the photo my mother is laughing. Head thrown back, neck arched.

Years ago, I met a woman against whom I’d carried a grudge for many years. My last memory of her was when I was around 16. She was walking down a lane, holding hands with the boy I thought was still my boyfriend.

When I met her again, we were both in our forties. It was at a school reunion and she was sitting with the boy, now a man, as well as another woman who’d been in our class.

The four of us chatted and I told her how I’d carried the memory of the two of them walking hand-in-hand and how it had hurt to know she’d stolen him from me.

“I never dated him,” she said.

The other woman who was chatting with us (she happened to have the same name) jumped into the conversation. “I dated him after you!” she said. “But I never stole him. You’d already broken up.”

Turns out. We had broken up. He just hadn’t told me.

The man in question, sitting between the two women, said nothing. Just shrugged a shoulder, smiled sheepishly and gave his little grin that seemed to say then, as it had said long ago to my teenage heart, “I’m so dang cute, you just gotta luv me.”

At the time, I laughed. Wow. All those years of holding a grudge and I’d had it wrong all along. How fickle and unreliable memory can be!

Looking at the photo of my mother, I wonder how true my memory is of her. Perhaps she was happier than I remember. Perhaps laughter came to her more naturally than the tears I remember.

I hope so. Because, no matter the details, just as the wound of a long ago betrayal weighed heavy in my heart, 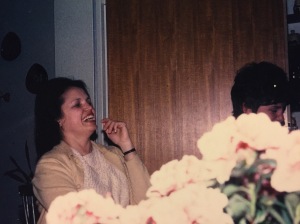 the image of my mother as being sad and fearful does not sit well in my heart. I’d like to carry the memory of my mother as a woman of light heart. A woman who laughed from the depths of her soul. Who danced long into the night, drinking champagne and flirting with men and spinning circles around the room as she sang some outrageous diddy she made up as she spun, her voice enchanting everyone in the room.

That woman was powerful. That woman never stepped back from her fears. She headed heart first into any storm, fighting for what was right, fighting against what was holding her back from being free. A fierce protector. A bold defender of the one’s she loved.

I saw a photo of my mother. She is the woman I remember. Laughing. Light of heart. Fierce and strong. Free

17 thoughts on “The memory of my mother”