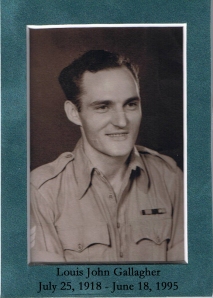 When the war came, my father set out to find it. He was living across the ocean in what was to become my homeland, Canada. But the war was important, he told me once. Britain was his homeland and all the young men were going. He figured he’d be okay. So he lied about his age and off he went to fight, for justice and peace, he said.

It was a lie. Not just the one he told about his age, but the other, bigger one, about being okay with fighting for what he believed in.

The war did not sit well with my father. He carried it with him and when he came home, he left justice and peace behind, and brought with him anger and pain instead.

My father seldom mentioned the war. He never spoke of what he saw, the things that hurt him, the regrets and sorrows he carried, the things he learned and wished he hadn’t. It was as if in the silencing of the guns, memory had to be silenced too.

I wondered about his memories. I wondered if that was where his anger came from. He wasn’t a violent man, but he was mercurial. One moment the world would be sunny and bright, the next a dark and seething storm would erupt and all you could do to avoid it was run for cover. I wondered if it was his unspoken memories that pushed him over the edge into darkness. I wondered if in not speaking of what happened, of what he saw, of what he felt, the pain could find no release except through anger.

Over the years, my father’s anger waned. Over the years, the memories he never spoke of dimmed, but my memory of his anger, his outbursts, his unpredictability stayed with me, even after he died.

I wonder if his anger would never have found its home in his heart if he had found peace with memory.

I wonder if he’d ever known that love is greater than anger because it is the only thing that can catch us when we fall.

It is time. Time to let go of memory and fall fearlessly into Love.

She clung
like a leaf
never giving in
to the fall

She hoped
every fall
every dive
into memory
she would forget
how to cling
and fall free
to dive in
to her life calling.

One day, she dove
too deep and forgot
to hold on

Letting go
she fell in
to the ONE thing
she had forgotten
would always be there
to catch her
when she fell
LOVE.

3 thoughts on “Forgetting to remember.”

Women and Words
Perspective on Trauma

Listening To My Intuition Following My Heart

Life past, present, thoughts about the future, and ever changing world

poetry, and other writings

Magickal living in the 21st century

Pictures and Poetry: A Journal of Nature and Self-Discovery

Art that Expresses the Heart

Be kind to yourself