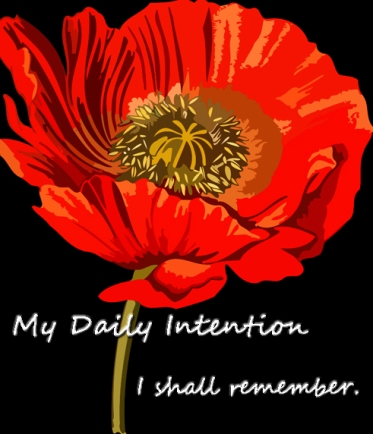 Remembrance Day. Lest we forget. Let us  not forget.

Their sacrifice. Their honour. Their duty to country. Their names.

Let us not forget.

My father went off to war when he was a boy. He went off and fought and came home and seldom spoke of those years again.

The following is the unedited version of a shorter Op-Ed I wrote that was published in the Calgary Herald several years ago. I share it here in memory of my father, and all the sons and daughters, boys and girls, men and women, who have gone off to war to never return. I share it here to remind me to never forget my father who was once a poet boy.

When the poet boy was sixteen, he lied about his age and ran off to war. It was a war he was too young to understand. Or know why he was fighting. When the guns were silenced and the victors and the vanquished carried off their dead and wounded, the poet boy was gone. In his stead, there stood a man. An angry man. A wounded man. The man who would become my father.

By the time of my arrival, the final note in a quartet of baby-boomer children, the poet boy was deeply buried beneath the burden of an unforgettable war and the dark moods that permeated my father’s being with the density of storm clouds blocking the sun. Occasionally, on a holiday or a walk in the woods, the sun would burst through and signs of the poet boy would seep out from beneath the burden of the past. Sometimes, like letters scrambled in a bowl of alphabet soup that momentarily made sense of a word drifting across the surface, images of the poet boy appeared in a note or a letter my father wrote me. For that one brief moment a light would be cast on what was lost and then suddenly, with the deftness of a croupier sweeping away the dice, the words would disappear as the angry man came sweeping back with the ferocity of winter rushing in from the north.

I spent my lifetime looking for the words that would make the poet boy appear, but time ran out when my father’s heart gave up its fierce beat to the silence of eternity. It was a massive coronary. My mother said he was angry when the pain hit him. Angry, but unafraid. She wasn’t allowed to call an ambulance. She wasn’t allowed to call a neighbor. He drove himself to the hospital and she sat helplessly beside him. As he crossed the threshold of the emergency room, he collapsed, never to awaken again. In his death, he was lost forever, leaving behind my anger for which I had no words.

On Remembrance Day, ten years after his death, I went in search of my father at the foot of the memorial to an unnamed soldier that stands in the middle of a city park. A trumpet played “Taps”. I stood at the edge of the crowd and fingered the felt of the bright red poppy I held between my thumb and fingers. It was a blustery day. A weak November sunshine peaked out from behind sullen grey clouds.  Bundled up against the cold, the crowd, young and old, silently approached the monument and placed their poppies on a ledge beneath the soldier’s feet.

I stood and watched and held back.

I wanted to understand the war. I wanted to find the father who might have been had the poet boy not run off to fight “the good war” as a commentator had called it earlier that morning on the radio. Where is the good in war, I wondered? I thought of soldiers falling, mother’s crying and anger never dying. I thought of the past, never resting, always remembered and I thought of my father, never forgotten. The poet boy who went to war and came home an angry man. In his anger, life became the battlefield upon which he fought to retain some sense of balance amidst the memories of a world gone mad.

Perhaps it is as George Orwell wrote in his novel, Nineteen Eighty-four:

“The very word ‘war’, therefore, has become misleading.  It would probably be accurate to say that by becoming continuous war has ceased to exist… War is Peace.”

For my father, anger became the peacetime of his world until his heart ran out of time and he lost all hope of finding the poetry within him.

There is still time for me.

On that cold November morning, I approach the monument. I stand at the bottom step and look at the bright red poppies lining the gun metal grey of the concrete base of the statue. Slowly, I take the first step up and then the second. I hesitate then reach forward and place my poppy amongst the blood red row lined up along the ledge.

I wait. I don’t want to leave. I want a sign. I want to know my father sees me.

I turn and watch a white-haired grandfather approach, his gloved right hand encasing the mitten covered hand of his granddaughter. Her bright curly locks tumble from around the edges of her white furry cap. Her pink overcoat is adorned with little white bunnies leaping along the bottom edge. She skips beside him, her smile wide, blue eyes bright.

They approach the monument, climb the few steps and stop beside me. The grandfather lets go of his granddaughter’s hand and steps forward to place his poppy on the ledge.  He stands for a moment, head bowed. The little girl turns to me, the poppy clasped between her pink mittens outstretched in front of her.

I pick her up, facing her towards the statue.

Carefully she places the poppy in the empty spot beside her grandfather’s.

I place her gently back on the ground.

She flashes me a toothy grin and skips away to join her grandfather where he waits at the foot of the monument. She grabs his hand.

“Do you think your daddy will know which one is mine?” she asks.

The grandfather laughs as he leads her back into the gathered throng.

I watch the little girl skip away with her grandfather. The wind gently stirs the poppies lining the ledge. I feel them ripple through my memories of a poet boy who once stood his ground and fell beneath the weight of war.

My father is gone from this world. The dreams he had, the promises of his youth were forever lost on the bloody tide of war that swept the poet boy away.  In his passing, he left behind a love of words born upon the essays and letters he wrote me throughout the years. Words of encouragement. Of admonishment. Words that inspired me. Humored me. Guided me. Touched me. Words that will never fade away.

I stand at the base of the monument and look up at the soldier mounted on its pedestal.  Perhaps he was once a poet boy hurrying off to war to become a man. Perhaps he too came back from war an angry man fearful of letting the memories die lest the gift of his life be forgotten.

I turn away and leave my poppy lying at his feet. I don’t know if my father will know which is mine. I don’t know if poppies grow where he has gone. But standing at the feet of the Unknown Soldier, the wind whispering through the poppies circling him in a blood red river, I feel the roots of the poet boy stir within me. He planted the seed that became my life.

The war is over. In loving memory of my father and those who fought beside him, I let go of anger. It is time for me to make peace.

7 thoughts on “The Poet Boy Remembered”