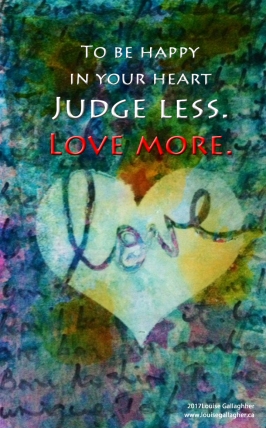 The first time I remember feeling the bitter sting of being judged harshly I was eleven years old. We had just moved to a new city in France. It was my first day at my new school. Grade seven. Because of the move we were a week late for the beginning of classes. Groups had been formed. Allegiances made. I walked into the schoolyard that morning feeling like an outsider.

I stood alone, waiting for the bell to ring inviting us in. Not far from me stood a group of girls. They kind of looked like the cool kids and I thought I’d like to be part of their tribe.

I smiled tentatively at one of them and she turned away.

I looked away too, not sure what to do.

They whispered among themselves and I could feel them looking at me, eyeing me up and down. I wanted to say Hi. I wanted to be part of the group. I wanted to make friends but was a little afraid and intimidated by the group. And then, I overheard one of the girls say to another as she glanced at me. “What a snob.”

I remember feeling the sting of those words. I remember thinking, “But you don’t even know me.”

It was a defining moment.

I had a choice to make. Let their judgement of me become my truth, or not. I could retreat behind a wall of resentment and attitude, or, I could step out and be known for who I am, not who others perceived me to be.

I stepped out. I decided to introduce myself to the group and not be the snob they’d judged me to be without even knowing me. (I think I may have also done it out of a bit of ‘spite’ too! How dare you judge me! I’ll show you!)

Stepping into that group I didn’t know that the girl who made the comment would become one of my very best friends. We are still in contact. A few years ago she came to Calgary and we spent a four day weekend catching up on thirty years of living. We had a blast.

And as to my defining moment?

It didn’t have a lot of impact on them. In fact, when my girlfriend and I talked about it later, she barely remembered the moment.

I told her how it was one of my defining moments. How, because I never wanted anyone to think I was a snob, I decided I could not act like one.

For that group, my stepping up first paved the way for them to see I wasn’t being standoffish. I was just feeling intimidated and scared — there I was at a new school, the new kid. They didn’t have to invite me into their group, but once I stepped up and showed myself to be who I was, I made it easy for them to let me in.

I didn’t understand that then. I didn’t see how I could be a threat to them or that they didn’t need to invite me in.

My happiness comes from loving, not judging. From seeking first to understand, before being understood.

When I stand in love and allow compassion for my fellow human beings to be my guide as well as the measurement of my happiness within, the world around me becomes a better place for me to stand in. In Love, anything is possible.

And the best part is…. The less I judge, the more I am buoyed up to live, love, laugh my way through every day!

It snowed last night. This morning, I look outside my mother’s window and see two hearts on the ground. I imagine my father’s spectral hand guiding the car that left the hearts in its tracks. My father liked to drive. My father is calling my mother home to his heart. #desingedbynature #naturespath #sayinggoodbye #messagefromtheotherside #attheendoflifethereisbeauty

NetworkedBlogs
Pene' Pasta for the Soul!

Behind every strong woman; are all the other women that came before!

Views from a skeptical heart

Everyone from everywhere
Paintin’ Tipsy
@ Work

the entrepreneur's resource to start up | revamp | scale your business

A Canadian Perspective on Living in the Windy City!

Random stuff, reflections on the meaning of life and death, humour, self-deprecation, a bit of bad poetry.

Writing daily towards her goal...

Thrills, Spills, and just a dash of Romance

One writer's experiences, and battles with words

The Art of Blogging

Time in the kitchen should be magical