We drove east from Hope, BC in pouring rain that turned to slush, to snow, to rain and back to snow.

On the ferry from Vancouver Island

It was a slower than normal drive to accommodate the conditions. I am grateful, my beloved factored in both the weather and my nervousness of driving in such unfavourable conditions.

I’m also grateful we did decide to finish our journey yesterday as the Hwy has been closed in both directions between Revelstoke and Golden since yesterday afternoon.

Stopped on the Highway outside Golden

We just slipped through.

The generosity of strangers.

About 20 kms west of Golden traffic stopped. A long line of cars serpentined along the road in front of us and quickly, the line grew behind us.

I took to Twitter and sure enough, DriveBC quickly answered my Twitter query — “Does anyone know what’s going on?”

There was a serious incident on the highway blocking lanes going in both directions. No information yet on when the highway would be open as it had occurred not long before we were stopped. No detour available.

It was a waiting game.

Until about an hour later when a young man hopped out of the U-haul in front of us, walked back to our vehicle and knocked on C.C.s window.

“There’s a detour road about 1km back,” he said. It will lead you to the outskirts of Golden.”

A pick-up had already turned around and was heading in the direction of the other route.

We turned around and followed him. As did other cars once the kind young man had passed on the information.

It was a backcountry road. The terrain was beautiful. Rolling hills with ranchhouses dotted amongst trees, lights glimmering in the fading light of day. The road was ploughed. Travel was easy.

About 20 minutes later we found ourselves at the edge of Golden. A stop to refuel, both vehicle and ourselves, and we decided to push through the 3 hours to home.

I’m grateful we did.

The Highway between Revelstoke and Golden remains shut down this morning due to avalanches. There’s a very heavy snowfall warning for the coastal highway leading into the interior today. Travel is ill-advised. And while there were travel warnings yesterday due to weather conditions, the roads weren’t slippery, just snowy at times and wet.

Grateful for C.C.’s patient driving — both with the conditions and me as I tend to be a little tense (ok a lot) when semi’s roar past in a blur of flying snow and gravel, especially on curves!

Our journey was punctuated by two serious incidents that took the lives of two people. One the day we left Tofino which closed the Hwy just east of Hope — we were stopping there for the night, and then the incident yesterday. 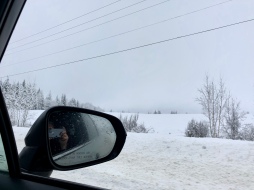 We drove home yesterday. Up and over the Coquihalla to the interior. Along the vast expanse of Lake Okanagan to the Rockies. We crossed over Roger’s Pass and then Kicking Horse further east. We drove down out of the mountains to the rolling foothills towards the city and home.

We carried with us our memories of our time by the sea. Our time playing with our grandson and visiting with our daughter and son-in-love.

It was a beautiful respite and a love-filled transition into the New Year.

This morning, I sit at my desk by the river, a candle burning, soft music playing in the background. Beaumont has had a brief morning walk and is once again asleep on the bed with C.C. I sip my tea and watch the traffic on the bridge travelling in the same direction we were yesterday.

In front of my window, ice islands stretch out from under the bridge and the river flows endlessly to a distant sea.

All is well with my world.